They say that a fan tells 3 people about great service, and someone who has received poor service tells 10. Well, I’m pissed at Amy Schumer’s tour company and I’m pissed at ticket reseller Viagogo for being very scammy. I’d like to shift gears from the usual topics on this nascent blog (tech, data analysis, civic issues, etc.) to share how NOT to treat people who have paid good money for your product or service. If you cannot deliver the goods or service, you need to allow for customers to get a refund.

About a month before my wife’s birthday, I noticed that Schumer was coming to Seattle to do a stand-up comedy performance at the Paramount Theater. So, for a special birthday surprise, I splurged and bought my wife and three of her friends four front-row tickets for her birthday, so that she could have a fun and memorable night out (followed by drinks before and after.)

Now, these tickets weren’t cheap; I shelled out $1,224.70 on October 20th, 2018 for four tickets from Viagogo, which was an authorized reseller for that event. Yes, this was expensive but I wanted my wife and three of her friends to have a great night out. I figured, it was for my wife’s birthday, we are lucky enough to be able to afford it, and instead of buying physical gifts, the things my wife loves most are laughter and memories with friends.

Unfortunately, about a week or so before the event, Amy Schumer had to opt-out of the show for serious health reasons related to her pregnancy, and announced that decision on her Instagram account.

Now, and this is important — I completely support Schumer’s decision to put her health and her child’s health in the highest priority.

An audience is far less important than one’s health, and performers cancel events all the time, for understandable and far more trivial reasons. I sincerely do wish Schumer the very best of health in her pregnancy and delivery.

My complaint is that she didn’t and still hasn’t officially canceled the event, even though, at this writing, the event never took place as scheduled two weeks ago. No, Schumer has formally has “postponed” the event to some as-yet unnamed date and time. This allows her to hang onto all the money that was paid in advance by the audience for the prior date and time — her resellers (at least Viagogo) are NOT refunding these ticket sales, because they only offer refunds if the event is cancelled. But what is an event that doesn’t happen on its date and time, but which also does not have any known new date or time?

That is sucky to do to customers and fans

I’m financially fortunate, but there are a lot of people for whom a few hundred bucks is a ton of money. Selling a product, not delivering it, and hanging onto the cash while not offering any chance of a refund is a sucky thing to do, and the Better Business Bureau and others rightly push back against it.

At this writing, we paid ticketholders still have no idea what date or time the event is going to be (OK, that’s fine), but we cannot get refunds (NOT fine) and we cannot resell without taking a huge hit (which is again NOT fine.)

Schumer could simply have cancelled the show and let us ticketholders make a decision again about buying for her next showing. She still can do the right thing here.

Instead, at this writing, she is trying to have it both ways, holding the cash many paid ticketholders put down. We thought we were buying a product on a particular date at a particular time in particular seats. We looked at the price, said it was worth it. That does not mean that any other date is also fine.

The way she is handling this is really atrocious. She’s got PR people and they are ducking the issue. When I told her via Instagram that I wish her well in her pregnancy, and that she should ALSO do the right thing and officially CANCEL the shows she’s missing, she blocked me. She’s ducking the issue, and not being forthright about it, and not doing right by her fans. Her tour managers haven’t informed Viagogo, the ticket reseller to tell them to refund our tickets.

Amy Schumer took the weaselly route, and did not formally cancel. She “postponed” the event, but (going on several weeks now) without any new date or time or venue. As a result, the ticketers such as Viagogo will not refund tickets, and reselling them for anywhere near the original value is basically impossible, given that there’s no known date, or time, or place. Her company’s communication on this has been terrible. Nonexistent, essentially. Laughable, maybe — but unfortunately, laughably bad.

The event was supposed to take place on November 24th at Seattle’s Paramount Theater. Tickets were purchased October 10th 2018 on Viagogo. It is now December 6th, two weeks after the originally scheduled events, and (a) no refunds are being processed by Viagogo for this show, because they claim the show was “rescheduled from its original date”, and (b), it has NOT been rescheduled — there is no time, no place, and no venue. So effectively, we customers just need to suck it. We may want to deploy that cash elsewhere. We cannot.

So Viagogo and Amy Schumer’s tour are:

Look, I can afford it. It mostly makes me angry for all those for whom this was a real stretch. She’s “postponed” shows in many different venues, and has not cancelled them. She tweets out that fans should “check with the box office for refunds” when she knows — or MUST know — that by simply “postponing to date TBD”, most venues and resellers will NOT refund.

I’ve taken to posting some questions on her Twitter feed and Instagram feed. While I wished her well in her pregnancy and said it was completely right and fair to CANCEL the show, she still blocked me. But you can jot her a note here.

I think the way she’s handling this is pretty atrocious. I’ll certainly never buy tickets again for this performer, and recommend you do not either. I regret the purchase. She and Viagogo clearly have no real respect for the money that ticketpayers pay them.

The event has come and gone, and maybe my wife will still go with her friends some day. But is this any way to treat your fans? I’d like a refund, which I think is the least that should be done here. 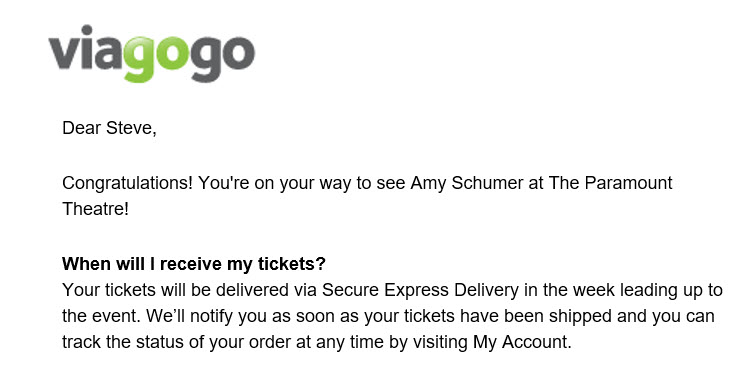 No word from Viagogo until 48 hours later, after I contact them 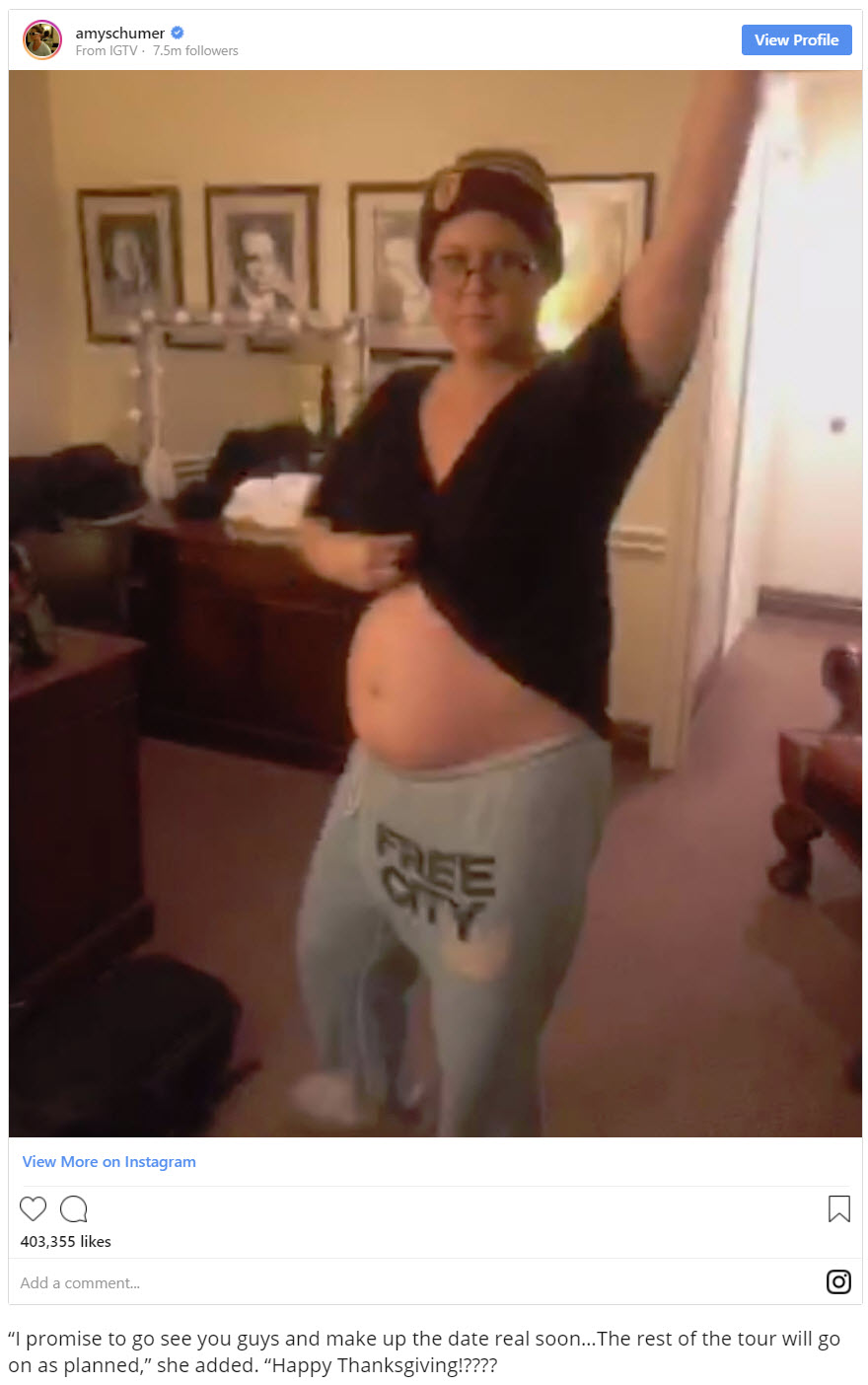 Notice no date or time named for the new show. So that means it’s cancelled, right? Not so fast. 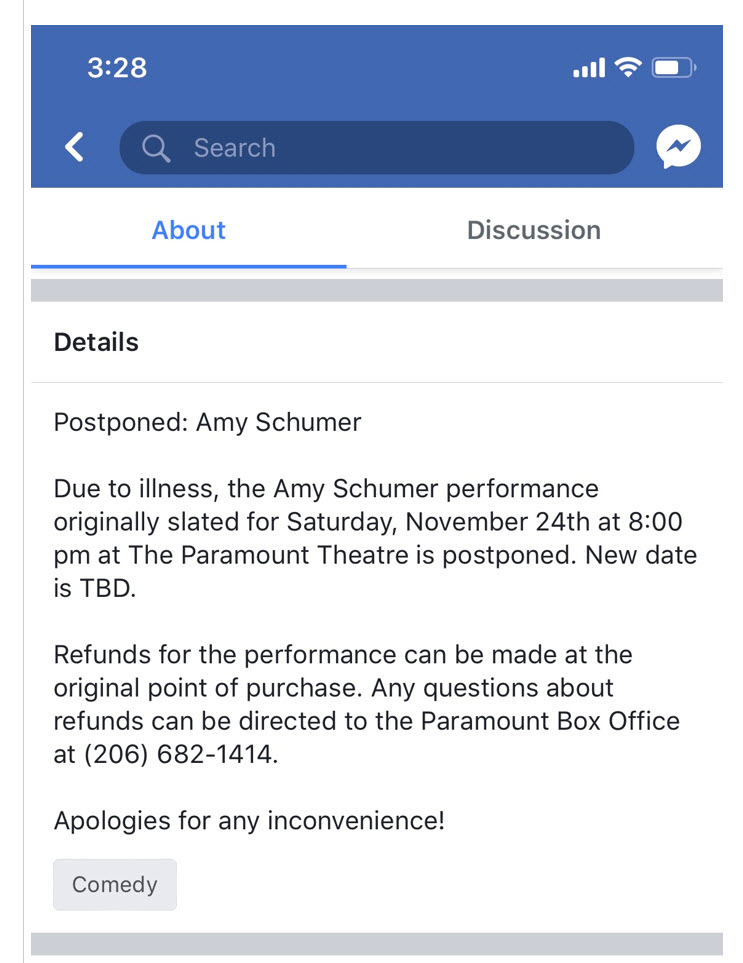 Finally, Viagogo gets back to my inquiry stating that yes, well, it’s postponed, and so I cannot get any refund, but hey… I can always resell the tickets for some unknown date and time! And hey, we’ll keep your $1,200, thanks very much. LAME. 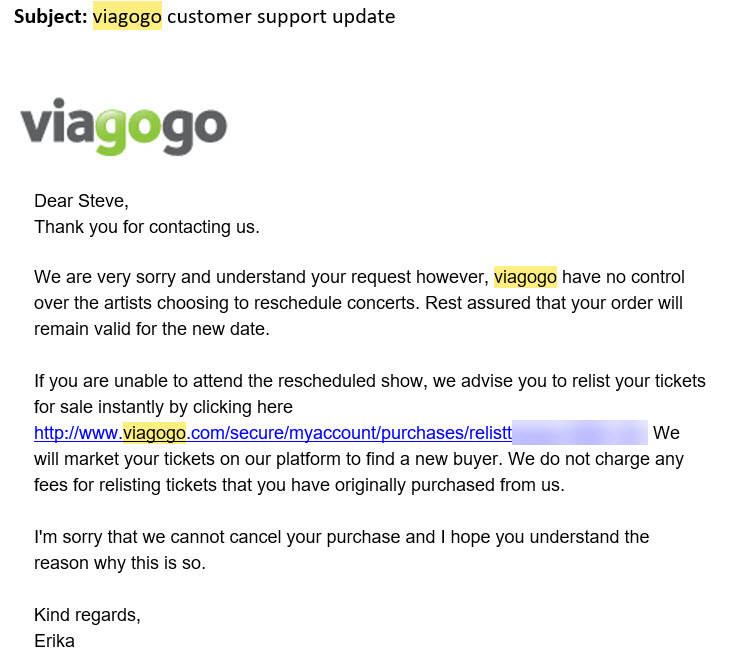 Notice that Viagogo’s lame boilerplate response seems to assume that we all know the new date and time. WE DO NOT KNOW THE NEW DATE AND TIME. You have our cash — in some cases a substantial amount of it — that you’re holding hostage for a show that only exists in the imagination of one or more people to do at some point. Maybe.

But my point is that there was a way to do this with integrity. CANCEL the show, don’t “postpone to some unknown date.” Let your fans get refunds on tickets; don’t sit on their cash while you figure it out — don’t assume that your new date and time, whenever it finally is announced, will actually WORK for fans. Those of us in the audience have lives too. That’s incredibly sucky, Amy Schumer and Viagogo, and I wanted to pass that word along. See you on Twitter.

It is now two months since I purchased the tickets, and nearly a month since the “postponed” show was to take place. Still no word from Schumer’s tour company on any date for the new show, nor any official cancellation. She’s hiding from Instagram and not mentioning this issue on Twitter. She’s still sitting on the cash of the tickets sold without doing the right thing and allowing full refunds to be issued by both the original venue and any resellers. Viagogo continues to refuse to refund the money, claiming that Schumer has only “postponed”, not “cancelled” the show. They tell me I can resell the tickets, but who is going to buy tickets without any date or time certain? They are essentially worthless, and no one is talking. Do the right thing and officially cancel the show, so that people can get their money back.

Schumer’s management company finally officially cancelled the show, several months later. Viagogo finally said they’d honor the tickets if I mailed them back. So I mailed them into Viagogo, triple-checking the mailing address (because they were valuable.)

But now, they claim never to have received them. Yet, their system shows that I purchased them.

A large part of this final step was my fault — I was in a hurry that day (was about to go on a trip), and I simply dropped the tickets with excess postage in a mailbox. Given the experience to date I certainly should have taken the time to go to the post office to get a certified letter showing receipt. At this point, I’m out the roughly $1200. Lesson learned — and I guess I’ll take most of the blame for not going to the post office to get a certified receipt — but man, what a shitty customer experience.