The conviction of Elizabeth Holmes should cause any founder to take stock of their claims: hopes, exaggeration, or fraud? 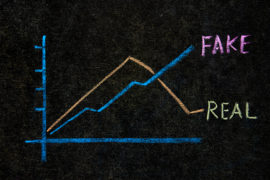 We’re only four days into 2022, and already the denizens of Silicon Valley have received a powerful message about the risks and rewards of making wildly exaggerated product claims. I’m referring of course to Tesla’s blowout report of near doubling (87% increase) in electric vehicle deliveries for 2021, which vastly surpassed analyst estimates. The resultant one-day pop in net worth of more than $31 billion was not a bad outcome for Time Magazine’s newest Person of the Year, Elon Musk.

Oh, you mean that other story?

Well, yes. On the day prior, Elizabeth Holmes was found guilty on three counts of committing wire fraud and one count of conspiracy to commit wire fraud. The Stanford dropout turned multi-billion-dollar entrepreneur turned felon is starting off 2022 on a very different note.

Now, we don’t know exactly where Holmes’ jurors drew the line on when ambition and audacity turned to fraud. Was it when she knowingly slapped the logos of Pfizer and Glaxo-Smithkline on product endorsement statements without their authorization? Was it when she repeatedly misstated or implied that Theranos devices were already in use by the military in operational capacity, even flying in Medivacs? Or was it when she neglected to mention that the vast majority of the patient bloodwork tests were processed on modified third-party machines, not Theranos-built machines? We don’t know.

But we do know that twelve jurors who heard the evidence unanimously found that what Holmes did constituted fraud. Specifically, they agreed it was three counts of wire fraud (that is, financial fraud using electronic means) and one count of conspiracy to commit wire fraud.

Lance Wade, one of Holmes’ attorneys, argued: “Failure is not a crime. Trying your hardest and coming up short is not a crime.” He’s right. Fraud is not merely overpromising. It requires intentional misrepresentation.

Like most tech entrepreneurs, Elon Musk knows about overpromising. Expressing hopes about the future, or even making very bold claims of what is to come — these are not just allowed, but expected of a good CEO.

But making false, consequential claims about the present or the past, even if one doesn’t personally profit from it, can land you in jail. Musk is no stranger to bold statements. Let’s look at one specific claim.

There’s a pretty good argument he must have known a million robo-taxis were not likely to be on the road by the end of 2020. After all, this wasn’t a long-range prediction: he made this claim as late as May 2019, a mere 18 months before the marker he set would have to come due.

Machine learning (and in particular “deep learning”) advanced quite rapidly from 2015 through 2020, so his bold claims about full-self-driving were made during a period of disruptive advancements. (So too were some of Holmes’ claims: miniaturization and healthcare tech also experienced some leaps of advancement during the first couple decades of this millennium.)

Musk’s repeated claims and teases of “full self driving by 2020” were untenable to most machine-learning researchers (including this occasional ML tinkerer), with so many edge cases and conditions, let alone the practicalities of getting past governmental review and building a million cars.

At the same time, we allow — even encourage and applaud — these kinds of claims and bold promises. Chances are, you agree with me that this big-thinking is admirable, desirable and even refreshing, when so much of our society seems to be focused on what we cannot or should not do. If you’ve ever lined up at an Apple store for the latest release, you’re also someone who is drawn to the promise of technology and are willing to overlook some of the realities of it.

Full self-driving is achievable in our lifetime, but he was clearly incorrect about the date and scale. Was Musk’s “million robotaxis by 2020” claim — one of many bold claims he’s made — fraudulent? It certainly was short-term beneficial to the company. Arguably, this helped with the Tesla “hype cycle” that boosted the stock price, attracted employees, added to investor and buyer confidence in the nascent electric vehicle sector, which all returned great value to Tesla. (Disclosure: I’m a stockholder and happy vehicle owner, having purchased my first EV in 2015.)

But no, to me, this is not a fraudulent claim, because it was reasonable to believe that revolutionary advancements in learning and training AI models might just enable it, and he wasn’t making a claim that it was available today, nor was he lying intentionally about it. Sure, the probability of it coming to fruition in the timeframe he promised was extremely slim (far less than 1%), but it was possible to imagine. 2017, 2018 and 2019 all had major leaps in machine learning algorithms and techniques — like Generative Adversarial Networks.

At the time of Musk’s 2019 claims, Tesla’s full-self-driving models were delivering pretty promising rates of improvement with every iteration. But full self driving hasn’t happened. Not yet. And stating even known-to-be-impossible goals about the future, by itself, isn’t fraud.

If you asked most people in 2015 — even scientists in the field — whether we were more likely to witness (a) full-self driving robotaxis on America’s highways or (b) cheaper-than-NASA, reusable orbital rockets landing like vertically with precision accuracy, most informed scientists and reasonable people would have opted for (a). And yet, the Michael Bay film became real:

Setting ambitious goals is not only legal, it’s essential for visionary leadership. Setting a “Big, Hairy Audacious Goal” (BHAG) was in fact one of the key markers of enduring companies, as Jim Collins chronicled in his business bestseller Built to Last. All across Big Tech, you’ll find people putting BHAG’s on Powerpoint decks and chatting them up at conferences and strategy offsites.

In my view, the jury was correct to hand down Holmes’ verdict, which will almost certainly be appealed. But it should cause those of us in tech to ponder, again, the sometimes-ambiguous zones between acceptable hype (defined by the FTC as “product puffery“) and outright fraud.

Holmes and Theranos’ biggest failure of duty was to the many patients who were relying upon accurate test results to direct their plans of care. Yes, investors lost money — nearly $1 billion of it. But product errors and known shortcomings, knowingly covered up, could have killed people, and even as it is, might have shortened some patients’ lives.

The prosecution failed to prove the essential patient-harm part of United States v. Elizabeth A. Holmes, losing all counts related to fraud against patients. Most legal analysts attribute this failure to the narrow lines of inquiry the judge would allow. Complicating matters further was the crown-jewel database of patient tests of this multi-billion-dollar startup somehow became totally inaccessible, which sure has a powerful “dog ate my homework” feel.

For the past decade, “minimum viable product” has been a key development paradigm of software delivery. Get the smallest acceptable version of your product out there. Ship it, even knowingly incomplete, and iterate rapidly, based upon market feedback. But one lesson from Holmes’ downfall is that even though software is eating the world, not every business should be run like a video-game company.

If you’re in healthcare, I’d argue that “minimum viable” must also be compliant with the Hippocratic Oath: “First, do no harm.” Put another way, Mark Zuckerburg’s “move fast and break things” ethos works well in some areas of tech targeting the low-risk, luxurious tippy-top of Maslow’s Hierarchy of needs (think video games, video streaming services, maybe even social media), but it’s a terrible model if you’re Boeing, Bechtel or Theranos. Broadly speaking, the lower your new startup focuses on Maslow’s Hierarchy, the higher your duty of care and to quality assurance.

I don’t fault Musk for overpromising. In fact, I admire him in part because he is such a bold thinker. He exists in an era of cynicism, “we can’t because the other guy”, dare-I-say depressing determinism of the day.

Send rockets up into space, and land them vertically on remote-controlled floating platforms in the ocean? You bet. Reshape America’s transportation system with a better way? Very much in progress. One of the reasons he’s Time’s Person of The Year is he eschews small thinking and gets big things done. But yes, he also makes big claims that for now at least are still in the future.

As Holmes spends the next several years between jail and fighting her appeal, we in high-tech should spend some time thinking about the distinction between fraud, product puffery and overpromising. The line sometimes feels blurry, but what is ambition for tomorrow versus what is reality today should be made clear to investors, customers, employees and the press.

Got any Powerpoints you want to update?