Hello, Seattle! I’ve just set up this blog. I wanted a spot to put various thoughts out there. I expect the topics to be varied.

Things that interest me: making Seattle better, entrepreneurship, volunteering, technology/software, fatherhood (and more broadly the often undersold importance of fathers, as well as parenting more broadly), data analysis, machine learning, AI, photography, privacy, documentary filmmaking. I’m guessing I’ll be writing about all of these topics and more. Will try to tag them to keep them organized on this site.

The homelessness crisis in Seattle continues to grow, and the ineffectiveness of our City Council has been increasingly apparent. Over the past couple of years, as I’ve watched our City Council embrace those on the far left and lurch further and further away from sensible, data-driven solutions, I’ve become increasingly interested in how we can move toward more effective, moderate, reasonable, data-driven governance.

I firmly believe that we taxpayers deserve better fiscal stewardship in Seattle. We need data-driven, evidence-based solutions for problems like the homelessness crisis. We have record city and state revenues, which have grown faster than our population. We are nearly tops in the nation in city budget per capita. We are a city of innovation — we ought to be able to do better.

I am compassionate toward a range of issues and have an open mind on any solution. I do not however think that one’s compassion is measured simply by saying “yes” to any proposed new program. We need smart solutions that we know work, and a systematic way to measure success.

I also don’t think that our recent past’s overemphasis on identity politics has been a healthy one. Taken to an extreme (and many times, it has been), this approach alienates real and potential allies.

I’ve gotten involved in the No Tax On Jobs initiative, which seeks to get a referendum on the November 2018 ballot to allow voters to express whether they’d like to keep or repeal the Seattle Head Tax. If you’d like information on where to sign, please visit the No Tax On Jobs site, or you can follow the group Speak Out Seattle on Facebook. 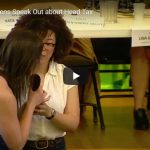 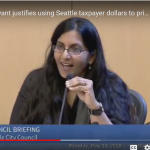