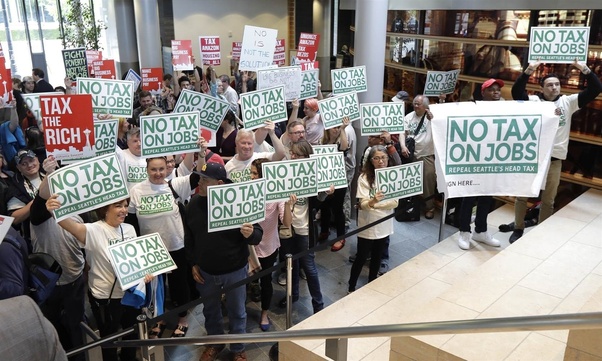 I was there at that raucous council meeting to repeal the vote, I signed an Open Letter from Tech Leaders Opposed to the Proposed Head Tax, and I was a volunteer signature gatherer and small donor ($275) to the repeal referendum effort.
Why did the council vote 7–2 to repeal it, just a few weeks after voting 9–0 to pass it? It is telling that the City Council called for a vote to repeal it right after the initial numbers were announced showing the overwhelming strength of the repeal referendum sentiment.

Here in Seattle, the City Council cannot block a valid referendum with signature counts exceeding a certain numerical threshold. That threshold varies based upon prior election counts. This year, that threshold came to about 17,500.

We got 45,833 signatures in less than three weeks, from a standing start.

To put that in perspective, it took just 73,000 votes to get our new mayor elected. The petition drive was still going strong when it wrapped up — plenty more than 45,000+ signatures were possible.

I suspect when the key SCC members saw the size of the citizen turnout to sign the petition, well over the required threshold, collected in a startlingly short period, they were forced to make a political decision: (a) plow ahead in a near certain losing effort to get voters to vote “no” on the repeal referendum (which Sawant very much wanted to do), or (b) heed voters, retrench and go about it a different way. Our hope is that by signaling tax fatigue, especially a new tax which penalizes hiring (and which would very likely have an indirect effect of raising prices and/or limiting in-city employment) what the City Council hears is that we want them to get a handle on their reckless and ineffective “management” of both the overall budget and the homelessness crisis.

This has been cast nationally as a “City Council vs. Amazon” debate, but that’s a false narrative. The tax would have applied to some 600 companies not named Amazon. Grocery stores. Pharmacies. Discount retail. Gas stations. Auto dealers. Fast food chains. Restaurants. Cafes.

And I personally didn’t see the hand of either Amazon, Starbucks or the Chamber of Commerce in my own or any volunteer (i.e. unpaid, unsolicited) efforts in any way. Not that this didn’t happen, but their influence was
far less than that portrayed by sheepish Councilmembers now looking for some entity to blame.

We moderates are fed up with Council mismanagement and hard-left ideology. We have a pretty atrocious Councilmember, Kshama Sawant, who has never missed an opportunity to promote a hard-left ideology and sow division, and uses her time, the city’s time, and even our own taxpayer dollars to foment “national movements” over proper fiscal and municipal management. She declares as a Socialist, but really, she is quite Marxist in both rhetoric and approach. That’s not hyperbole. Every “movement” leader needs an archenemy, and she chose to vilify Jeff Bezos many months ago.
But she’s even alienating would-be allies, like labor unions:

[ Side note: See those red signs that Councilmember Sawant’s protesters are holding? Hundreds of them — maybe thousands — were printed during the EHT fight. The printing of these was paid-for by Seattle city taxpayers, because Sawant let her “movement” use city printers to print them! Check out this video .]

Seattle is flush with cash, and we’ve been generous.

We have record revenues in both per capita and absolute terms. City coffers have never received more than they are receiving today. Unemployment has never been lower. And we taxpayers have been compassionate and very generous in tackling this problem: we just passed (and I voted for) a $290 million Affordable Housing Levy just two years ago. That is, we voted ourselves a very sizeable property tax increase quite recently. Collectively, we spend over $1 billion per year on the issue regionally, when adding private and public programs together, per the Puget Sound Business Journal’s study last year.

Our city paid $200,000 to a national expert for a series of good recommendations on homelessness response and we’ve ignored two of the most important central recommendations:

We look at cities like Boston, which spends far less on homelessness per capita, and their results are improving; we spend far more, with different policies, and our results are getting worse — much worse. Could it be that our policies, and not lack of funds is what is exacerbating the problem?
Under those conditions, it is eminently reasonable to say STOP, let’s get hold of this. Let’s build a better plan and reprioritize some of our EXISTING funds if we truly need more than the $70+ million already being allocated directly by city taxpayers. If existing funds aren’t enough: sorry, but with an all-time record budget both in per capita and absolute terms, some pet projects will have to go. (I can name $10+ million of them in my own neighborhood alone.)

What’s changed is that the “fed up middle” has been activated and is getting organized, in places like Speak Out Seattle! on Facebook, to finally start rivaling and surpassing the pushback from the hard left.

Some petition signers literally ran to take the pen from my hand. And it’s not because Amazon is paying us. The movement got less than 10% of its funding from Amazon, and I know dozens of unpaid volunteers who helped with this campaign because they’re tired of the City Council’s poor policymaking and mismanagement.

As I met signer after signer, they told me, they’re fed up with strident, hard-left ideology taking precedence over sensible debate and results. Of leftist bullying destroying civility. Of misguided shout-downs drowning out sensible moderate voices. And of a City Council that, after years of fiscal mismanagement, in the midst of record revenues both in absolute and per capita terms, wants to impose yet another tax before even having a clear plan, and before demonstrating results that work.

Many of us (me included) just added to our own tax bills by approving a $290 million Affordable Housing Levy in 2016, yet the City Council cannot say with audited clarity and independence just where, precisely, that money has gone and with what results. When numbers are mentioned, they’re all over the map, vary by Councilmember, and seem to change weekly.

This City Council is the key legislative, policy-making and resource allocation body in a MUNICIPAL government representing over 800,000 people. Yet we are being treated to regular grandstanding for a “grassroots national movement.” Except the key “leader” here is absolutely abysmal when it comes to fiduciary obligation to taxpayers in the areas of public safety and budget and many other matters.

Most of us, upon observing a bathtub with receding water, wouldn’t simply rush to install a second faucet before ensuring that the stopper was properly seated. But that’s what it feels like the Council was forging ahead with here, before demonstrating fiscal competence.

So that’s an overwhelming level of public support against the employee hours tax. Other polls from KIRO and Q13 and even the Council’s own internal polling
showed strong sentiment against as well.

They repealed it because they feared the “fed up moderate” vote at the polls. (I am one such moderate.) They reasoned, rightly I think, that having this ballot measure would also jeopardize new levies as well. One in particular that is getting ready for voters in November is a big one around education.

Further, they knew that a vote to repeal, by city charter, put implementation plans on hold, and the EHT was interfering with exploratory efforts to unite city and county level programs.

A humorous but sad moment at the end of the meeting: the “Tax Amazon” Sawant socialist movement started loudly chanting — as they are want to do — “Vote! Them! Out!” Those of us in the other faction looked at each other, cocked our heads a bit, and said “hey, that’s what we’re saying too.” So we all joined in, every citizen in that chamber except the press and the Councilmembers themselves. So at least the meeting ended on a moment of boisterous unity.

Look, it’s easy to complain about a complex issue. So what
should we be doing about the homeless crisis in Seattle? I’m still formulating my views, but I’ve put a few of my own thoughts here on my blog:
Fixing the Homeless Crisis