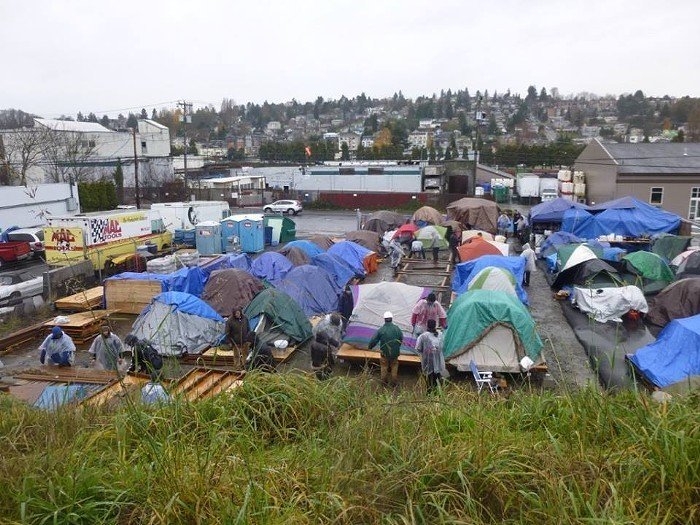 It’s going on three years since Seattle declared a homelessness crisis, but the homeless population in Seattle continues to rise. The amalgam of programs we’ve tried since 2015 hasn’t stemmed the growth in Seattle’s homeless counts; in fact, the numbers have actually accelerated, particularly of those living in vehicles.

There is no shortage of recommendations on what not to do, but what should we do? Plenty.

Broadly, I would say that the solution to begin to turn this around includes, but is not limited to:

[1] Build permanent (or at a minimum, semi-permanent, like FEMA tent) shelter with attached, mandatory addiction treatment services. Fix and/or suspend broken city policies that make it more attractive to be here as opposed to far away from this region if you are addicted, or looking to get addicted, and not from this region. Yes, we should have compassion for all, but we shouldn’t unnecessarily expand “magnet” incentives during this period of local crisis. Once we get our own population better cared for, we can certainly revisit this issue. This might need to include:

[2] Consider time-limiting benefits to those not from here originally (6 months? a year? two years?) Since the programs are largely funded by Seattleites and sold to the public as being based on helping those who are displaced due to high cost, it should be OK to focus on Seattleites and, once programs are unified exclusively at the county level, King County-ites. With limited resources and a desire to limit inbound growth on an already overburdened system, it should be OK to have policies which are more comparatively generous for those who, through no fault of their own, have been DISPLACED due to affordability or are fleeing domestic violence or what have you, vs. those who have made active choices to come here, vs. those who have serious addiction problems and don’t want to get well.

Right now, there’s essentially zero distinction among these groups from an eligibility or even duration-of-benefits standpoint, but they are VERY different segments, and it is OK for our sense of obligation to each of these segments to vary. At a bare minimum, even if there were zero such cases and this were NOT an issue, enacting such a policy would nip in the bud any “Freattle” objection to these policies and thus help gain broader public support.

Related post: Bridging the Divide, with the difficult-to-hear but grounded-in-reality sentiment that for more and more generosity to flow beyond the already copious amounts, we must also have reasonable limits and focused priorities on those from here, because these benefits are funded by those from here.

Just how big or small is this problem? Quite frankly, the data is squishy on who was displaced from here versus inbound from elsewhere because of the way we try to measure this data, as I attempt to outline in “Where Seattle’s Growth In Homeless Coming From?”

[3] Unify programs to create better pathways and care from addiction to employment for those that can. The Puget Sound region spends over $1 billion annually on the homeless crisis, and has a ton of overlapping programs and touchpoints. Recognize that a large driver of the homeless crisis is addiction, and ensure we have pathways for treatment. Be willing to make treatment mandatory to receive certain benefits and in some cases even to remain located where they are.

[4] Create city-administered, city-paid low-wage city-jobs like Ft. Worth and a program to help those get a leg up. Require those to work who are physically and mentally able to do so. Ask corporations to contribute to that fund, and consider promotion of them as sponsors.

[5] Pursue unified, county-level administration, not fragmented, duplicate city and county-level administration. There is finally a nascent effort to do so, begun by Mayor Durkan and King County Executive Dow Constantine. Have all in the program use relationship management apps and services (and yes, some are available off the shelf — it doesn’t HAVE to be super-complicated) to track and unify on an individual level. Perhaps even a CRM company like Salesforce might configure and deliver it as a pilot pro-bono or in-kind charitable donation. I’m serious — before just laughing this off, consider what an individual-level, unified relationship-management overview would do. It sure would reduce arguments over data. We cannot easily improve what we do not measure.

[6] Relax the many restrictive landlord policies that are causing landlords to abandon offering more supply; consider tax incentives to landlords who offer at or below affordable range.

[7] Accelerate permitting for affordable housing units, such as the pre-approved plans used for backyard tiny houses (but apply it more broadly)

[8] MEASURE EVERYTHING: where people are inbound from, what services they need, how long they’ve needed them, touchpoints, eliminate duplication, etc. Without divulging personally identifiable information, make aggregate data available to University of Washington and other research universities. Make the “Find It, Fix It” app data available via data feeds and API’s, stripping out the personally identifiable information and any other confidential information. Allow citizens to get a look at trends, hotspots, most areas of citizen request, etc.

[10] RE-PRIORITIZE the city budget. I agree that homelessness should be a top priority. So let’s cancel — or at least postpone, expensive, unpopular programs like specific road reconfigs (35th, Sand Point Way, there are others.) Reallocate those funds from cancelled programs. In my neighborhood alone, there’s at least $10 million of savings there — that’s more than 20% of what was “lost” by repealing the Employee Hours Tax. And that’s just of the programs I know that are nearby.

[12] Don’t sanction RV living within the city unless permitted ahead of time, and only allow a handful of those permits for exceptional cases, and know where they are.

[14] Bring in those administrators who have actually seen great results elsewhere, and fire the ones here that have failed us.

[15] Run a full, independent audit of all homeless providers over the past 3 years and make the results public.

[16] Place more stringent requirements on addiction treatment. With tracking, track those that have refused treatment over X amount of times, and enforce vagrancy laws on those who have consistently refused this.

[17] Focus on permanent shelter, not far more expensive temporary encampments and mini-homes. Perhaps even look to failing big-box retailers to buy or lease their property. Check out the New York Times story on turning Macy’s into a homeless shelter, for instance. Here in Seattle, there are two Safeways closing, a SEARS in Shoreline that’s closing, Toys R Us that’s folded up shop, and more.  It may sound crazy, but it could be an affordable place in which to build out apartments with fixed and better shelter. Barbara Poppe is quite clear that we shouldn’t allow encampment, yet we continue to do so. It’s an expensive stopgap, and it may signal virtue, but it’s more expensive and it’s not compassionate.

[18] Once we have proven that initial efforts are working at a reasonable cost, and when neighbors start to have their concerns about crime, needles and overnight encampment/RV taken more seriously, consider increasing the B&O tax (which doesn’t directly penalize hiring) or extending the Affordable Housing Levy for several more years. The point here is that trust must first be restored during a period of temporary re-prioritization of funds from other non-mandatory city projects. Programs must be united at the county level, taxpaying neighbors must begin to SEE their concerns taken seriously, and THEN we can go about increasing levies or taxes to pay for full implementation. The way the council has pursued it has been to first find revenue sources to double-down on a failing set of policies, which had a great deal to do with the failure we now see.

[19] Make needle exchange a true exchange, not a giveaway: Why don’t we require needles to be turned in any more to get more needles?

… that’s a starting list off the top of my head, but it’s far from complete.

3 thoughts on “Fixing the Homeless Crisis”