A vexing question at the center of the debate around homelessness policy is: where is the growth in Seattle’s homeless coming from?

Specifically, to what extent is the growth due to locals losing their homes and being displaced vs. inbound growth from other regions of the US? Yes, I know it’s not entirely one or the other (and there are certainly myriad causes and situations), but these are the two ideological extremes.

So what’s the composition? The answer seems knowable, but the data, thus far at least, isn’t conclusive.

First, Why is Knowing the Answer Important?

In my view, answering this question is central to addressing the problem.

Let’s say we knew that a large percentage of Seattle’s substantial growth in homelessness is from those coming to Seattle from outside the region. It would be reasonable to conclude that our local policies and relatively permissive enforcement have something to do with the growth in homelessness, and that perhaps we ought to rein those in or at least make them time-limited for those not from here at a minimum until well after we get our crisis under control.

If however all of our homeless population growth were indeed due to displacement and lack-of-affordability, we’d design different responses. We’d have far less reason to believe our policies are drawing people in and need any change. And we’d have stronger rationale to demand that the biggest drivers of the affordability crisis (I’m looking at you, Amazon, big tech, biotech, Starbucks and Seattle tech boom) must pay the disproportionate cost in attempting to right the issue that “their” success has created. (Though of course, we’d also still have to include things like rising property taxes and restrictions on landlords, which have each put upward pressure on housing costs and made affordability more scarce.)

Most of us Emerald City dwellers have heard the term “Freattle,” which refers to a generous panoply of services offered with few accompanying responsibilities demanded of the beneficiary. But is this actually a thing, or just a pejorative used to demean or even “criminalize” the homeless? I honestly don’t yet know, but I have a hunch there’s some degree of reality to it.

First, there are numerous anecdotes of local encampments of people coming to Seattle from outside the region. For instance, there’s an encampment currently at Seattle Center that has a couple from West Virginia, which we’ve for some reason refused to clear.  And there’s a recent violent rape by a homeless man who came in from Texas, who managed to avoid an outstanding arrest warrant by living in a sanctioned (some would say, sanctuary) encampment. Even though he benefited from Seattle taxpayer generosity, there was no requirement for his ID to be checked for outstanding warrant when residing at Nickelsville. These are pretty good instances of “Freattle” in action.

Next, note that there’s been a 46% increase in people living in vehicles from 2017’s count to 2018’s. That includes RV’s. And most vehicles, of course, can move. So, where from? Just within the city itself?

Is data simply the plural of anecdote?

Intuitively, there’s reason to believe that inbound migration of homeless individuals to the Seattle region has been happening, though the extent of this influx is unclear.

We do know that we have among the most permissive policies around drug use and lack of loitering/encampment law enforcement in the nation. We have explicit de-policing policies around RVs and have lessened must-move enforcement. We have hands-off approaches to encampments. We have city council members decrying sweeps. And we’re planning a “safe” government-funded injection mobile site — the first in the nation. A logical question: why shouldn’t these policies have any impact on migration? What’s the clear proof that it doesn’t?

I also find the reluctance of Seattle and King County to get crystal clear data on this “where are people from” issue to be suspect (e.g., by not asking the question in a clear way — obfuscating the issue — see below), and emblematic of an historically ideologically-driven, relatively evidence-free (or, at a minimum, evidence-bending) approach to the problem.

The midwest and Texas have seen declines in homelessness during the past decade, and King County’s has only increased. Nationwide, the number of individuals experiencing chronic homelessness declined by 18 percent, or over 19,000 people, between 2010 and 2017, according to the 2017 Annual Report on Homelessness  to Congress, yet Seattle’s has increased greatly during that same period.

While no one should question that affordability has been a key driver of the crisis, in my view homelessness can’t just be displacement due to economic growth, either, yet that’s how its currently framed. Take Texas and the midwest: the fracking boom and general economic recovery has greatly benefited these regions; why has their homeless populations shrunk over this same period, while ours has skyrocketed? And why has Boston’s been on the decline?

The Homeless Housing and Assistance Act  requires that each county in Washington State conduct an annual point in time count of sheltered and unsheltered homeless persons. This census is conducted in accordance with the requirements of the U.S. Department of Housing and Urban Development (HUD). You’ll find the full Seattle/King County 2018 Report at the end of this post.

It’s very important to know how the questions are posed and how the data is gathered before drawing any conclusions from the data gathered.

Point In Time Survey Doesn’t Ask “Where are you from?” In a Meaningful Way

The only data-collection vehicle that I’ve seen that attempts to collect data on the question of whether we have a lot of inbound homeless is the annual “Point in Time” Survey. King County and Seattle’s “AllHome” agency runs the annual “Point In Time” survey of the homeless. And sadly, it’s asked in such a way as to not really provide any meaningful data.

1: “Where were you living at the time you most recently became homeless?”

2: “How long have you lived in King County?”

Yet on the first question, a full 83.1% of survey respondents said they were living in King County at the time they “most recently” became homeless. Strange. How can we reconcile these seemingly incongruous responses? Taken together, it might seem that people come here, experience affordability and are displaced. But is that really what’s going on?

Perhaps the question itself is creating this odd congruence.

A distinct possibility is that it’s the result of the way the question in Section E was asked: “Where were you living at the time you most recently became homeless?”

Does this include those who migrated in from other regions? I think in many cases yes, it does.

Imagine you were, say, sharing a home with a friend or parent in Texas, then hopped in a van to come up to Seattle and “became” homeless here. How would you answer this question? You’d probably say you were living in Seattle or King County when you “became” homeless. So my hunch is that the “most recently became homeless” question includes a lot of people that are actually inbound from elsewhere. 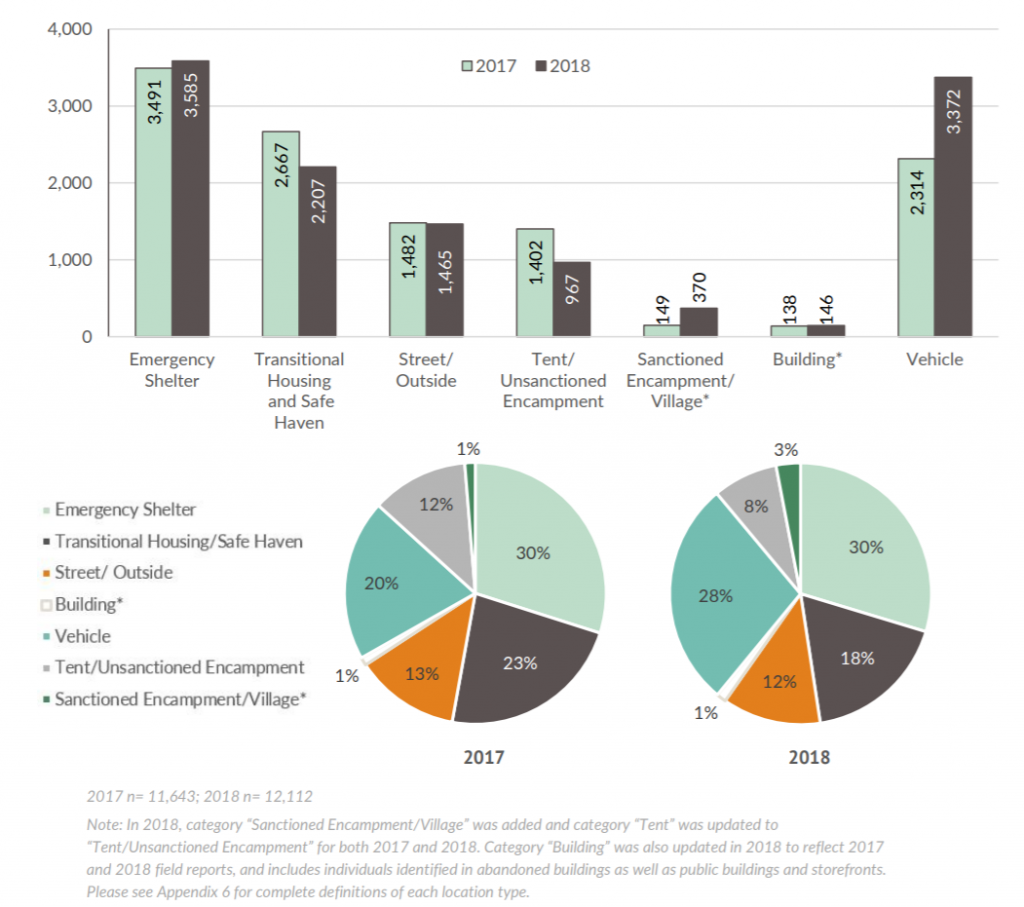 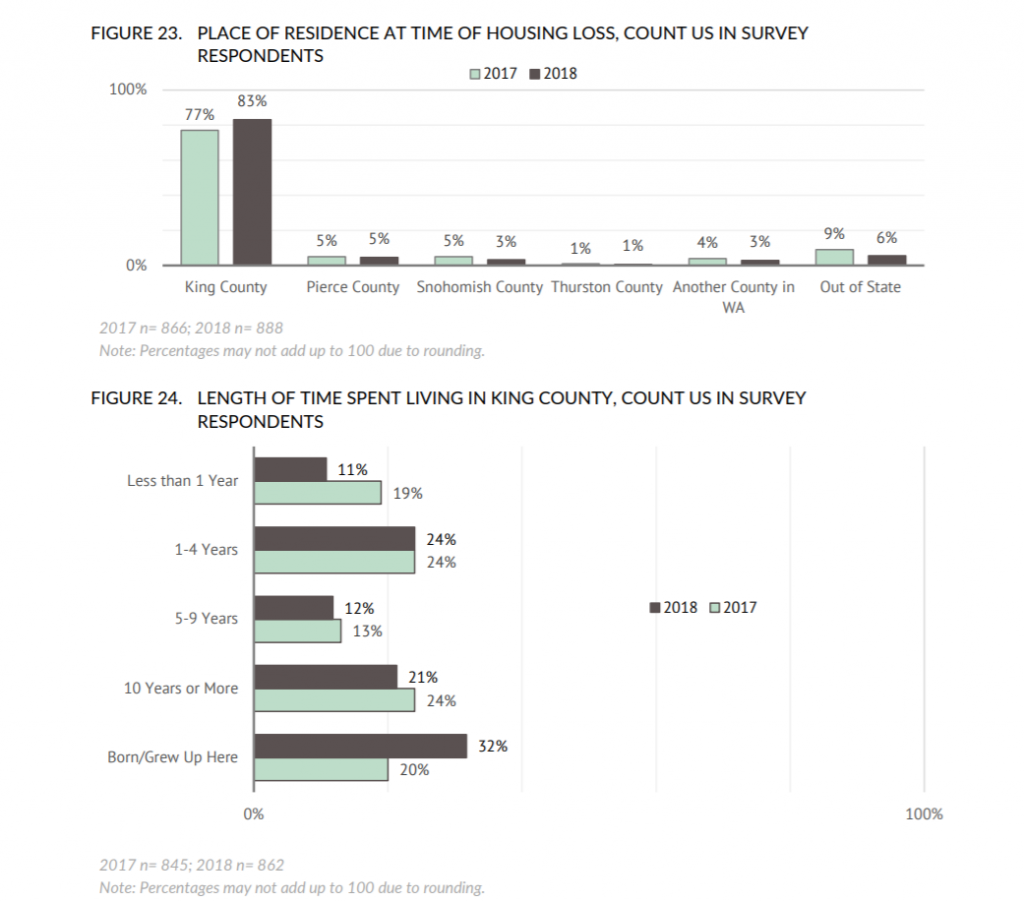 Why did you come here?

The 2017 survey also explicitly asked why those experiencing homelessness came to Seattle. But note that this chart only shows the TOP reason they came to Seattle. So someone who came here to access homeless services but also to be with friends might only show up as #1 on the list: 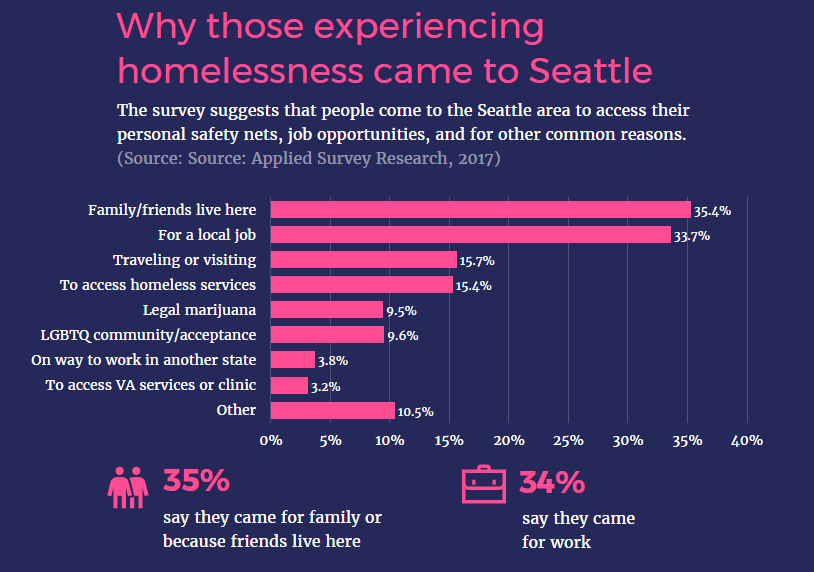 Source: Gaining a Better Understanding of Those Experiencing Homelessness, Seattle.gov.

On the more general Washington State Point-in-Time Survey (not, to my knowledge, used in the All Home Point in Time Count in 2018), you’ll see the Section C, subitem i question: “Last known permanent city.”

That’s it. For the Washington State surveys, that’s primarily what we have to go on, and it’s not much. 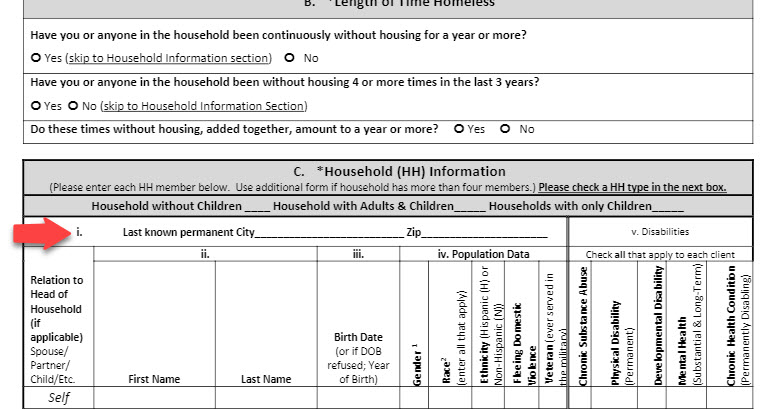 
The Findings as Summarized By AllHome